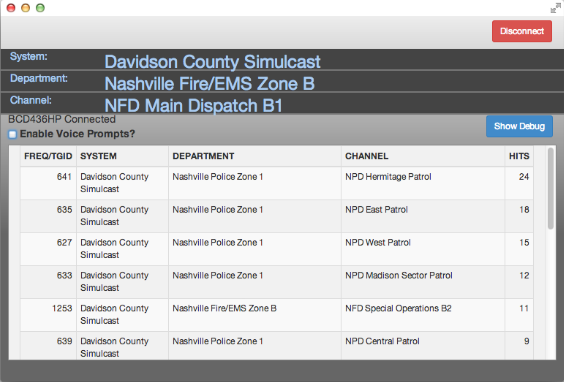 The Scanner Monitor application uses a Chrome App to connect to BCDx36HP scanners. This service will not be available for new installs later in 2017 - and will no longer run in early 2018. The following is part of Google's notice for dropping this capability:

As we continue our efforts to simplify Chrome, we believe it’s time to begin the evolution away from the Chrome apps platform. Today, approximately 1% of users on Windows, Mac and Linux actively use Chrome packaged apps. We will be removing support for packaged and hosted apps from Chrome on Windows, Mac, and Linux over the next two years.

In the second half of 2017, the Chrome Web Store will no longer show Chrome apps on Windows, Mac, and Linux, but will continue to surface extensions and themes. In early 2018, users on these platforms will no longer be able to load Chrome apps.

What does it do?

Simply use a web browser to see, hear, and control your scanner at home while you are out. Audio streaming feature is available on compatible browsers, including Chrome on Android phones.

Install the Desktop App from the Chrome Web Store.

This app will monitor and display information from your BCD436HP

Simply connect your scanner with the usb cable in serial mode, start the app and select the connected port. Responses are logged and sorted by hit count. Results can be copied and pasted into a spreadsheet for further reviewing or saving.

With text-to-speech capabilities, you can allow the app to speak when the scanner stops on a channel. Helps so you don't have to always look at the screen to see which channel is broadcasting.

Keypad feature allows you to run some of the basic radio controls from the application.

Some functionality for HP-1 and other units is available.

This app is not affiliated with Uniden Corporation and is intended for personal use only.

Control your BCD436HP or BCD536HP scanner from a browser on a smartphone, tablet, or other computer!

It only requires an Internet connection and the scanner to be connected to the Scanner Monitor Chrome App.